I suppose Peggy Sue (#6) will be the choice of the public as she seeks her third consecutive victory. It’s obviously a good sign that she’s been claimed back by Linda Rice, who lost her for $16,000 on Jan. 4 and is now elected to run her in a protected spot. She’s clearly improved a great deal in recent months, and that improvement has coincided with a sharpening of her early speed. Yet, whereas she was able to set a moderate pace and win in gate-to-wire fashion last time, she’s going to have to revert to stalking tactics here.

Elegant Rose (#2) and Winifred J (#3) are both quicker in the early going and even Shesasuperfreak (#5) shouldn’t be far off them. I could envision a scenario in which all of these runners hook up in the early going to ensure that the pace is least honest. 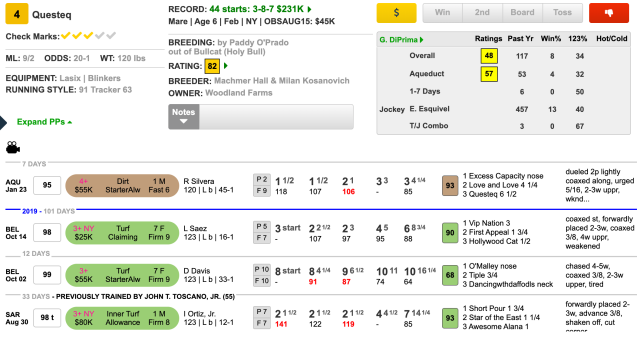 If that situation materializes, I would want to turn to QUESTEQ (#4) as the alternative. This mare is not a winning type, having visited the winner’s circle just 3 times in 44 career starts. However, this is the time of year when she typically excels. She’s equally as talented on dirt as she is on turf and she’s able to find some easier spots during the off-season, having shown a real preference for Aqueduct in the winter. I was highly encouraged by her return to the races last time, as she contested a fast pace and held on well to be third behind two fillies who are simply faster than many of the rivals she meets here. Now she finds herself in a slightly easier starter allowance field, and the turnback to 6 1/2 furlongs figures to suit her. She’s not a mare that needs the lead to be successful and she’s going to be tough if able to maintain the form that she displayed 7 days ago.