Pace figures are now available as part of TimeformUS past performances. Based on the fractional times run by each horse at each point of call in a race, TimeformUS Pace Figures give you a clear sense of the pace scenarios that a horse has faced in prior races.

We’ve been telling you for a while now that TimeformUS Speed Figures are created by combining a horse’s final-time figure, pace figures, and running style into one number. With the addition of pace figures, you can see the role that pace played in the race and any effect it had on the speed figure.

How To Use TimeformUS Pace Figures
From the past performances, click this section of any running line:

This will bring up your options for what you can display in this section.

Select Pace Figures, and choose to display the pace figures for ‘This Horse,’ or the ‘Leader.’

TimeformUS Pace Figures will now appear in the running lines.

Using TimeformUS Pace Figures
TimeformUS Chief Figure Maker Craig Milkowski recently wrote a blog post about the importance of pace, and how understanding the pace of a horse’s previous races will make you think twice before adding or tossing him from your tickets. We also have a “Today in Racing” blog post from this morning which addresses this new feature.

Let’s take a look at a recent race with and without TimeformUS Pace Figures displayed. In Ullapool’s race three back, she set a blistering pace before fading and finishing ninth.

You’ll notice they’re red, which means this race had particularly fast fractions considering the final time of the race. Now, let’s take a look at her pace figures:

In this seven furlong race, Ullapool’s pace figure for the opening quarter mile was a staggering 167. She earned a 135 for a half-mile and a 101 for six furlongs. The 77 you see beneath her finish position is her final-time figure (keeping in mind her final time was 1:24.11). The 102 is her speed figure for the race. When we say we incorporate pace into our speed figures, the difference between the 77 and the 102 is exactly what we’re talking about.

Keep in mind that this is an extreme example. You won’t often see a 25-point change from a horse’s final-time figure to its speed figure. Let’s take a look at the full chart for this race, and note the speed figure adjustments for pace applied to each horse: 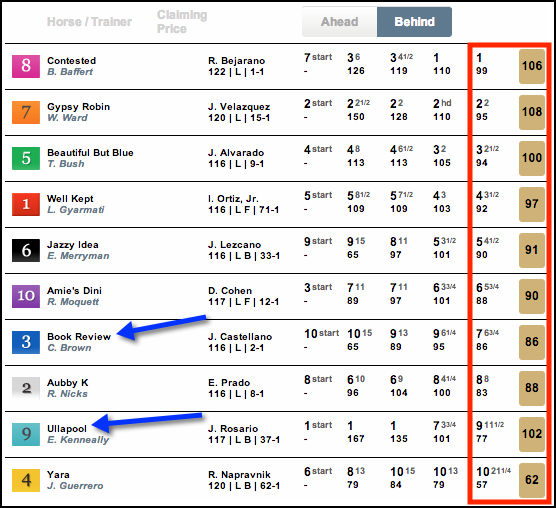 The horses closest to the lead, such as Ullapool, got a large boost to their speed figure because of the pace they dealt with, while Book Review, who was 13-15 lengths back early, got a final-time figure of 86 and a matching speed figure. Book Review eventually closed into that collapsing pace, picked off a few horses along the way, and finished seventh. Her final time was .68-seconds faster than Ullapool’s, but her speed figure was an 86 (compared to Ullapool’s 102).

Frequently Asked Questions
Q: What scale are TimeformUS Pace Figures on?
A: They’re on the same scale as TimeformUS Speed Figures, which top out in the high 140s. You see a 167 pace figure in the above example because horses that don’t ration their energy well can surpass these limits for portions of the race. They just cannot maintain it for the entire distance.

Q: What does the red and blue color coding mean that I sometimes see in the Pace Figures?
A: Click here for a full explanation.

The Dilemma of the Slow-Paced Race
Pace Figures and the Cash Call Futurity: A Deeper Look
Run-Up and Its Effect on Final Time

23 Responses to Pace Figures Added to TimeformUS Past Performances