By the first Monday in May,  the Internet was abuzz with Kentucky Derby 140 speed figure chatter, an annual ritual with its share of twists. This time, seemingly every horseplayer had an opinion on the effects of wind and watering on the final time of the race.

First, the number: We gave this year’s Kentucky Derby winner, California Chrome, a TimeformUS Speed Figure of 110, which leaves him about five points slower than the average Derby winner, but still faster than many others have him.

And now let’s get into the process. Here’s a quick explanation of our charts, followed by the chart of this year’s Derby results: 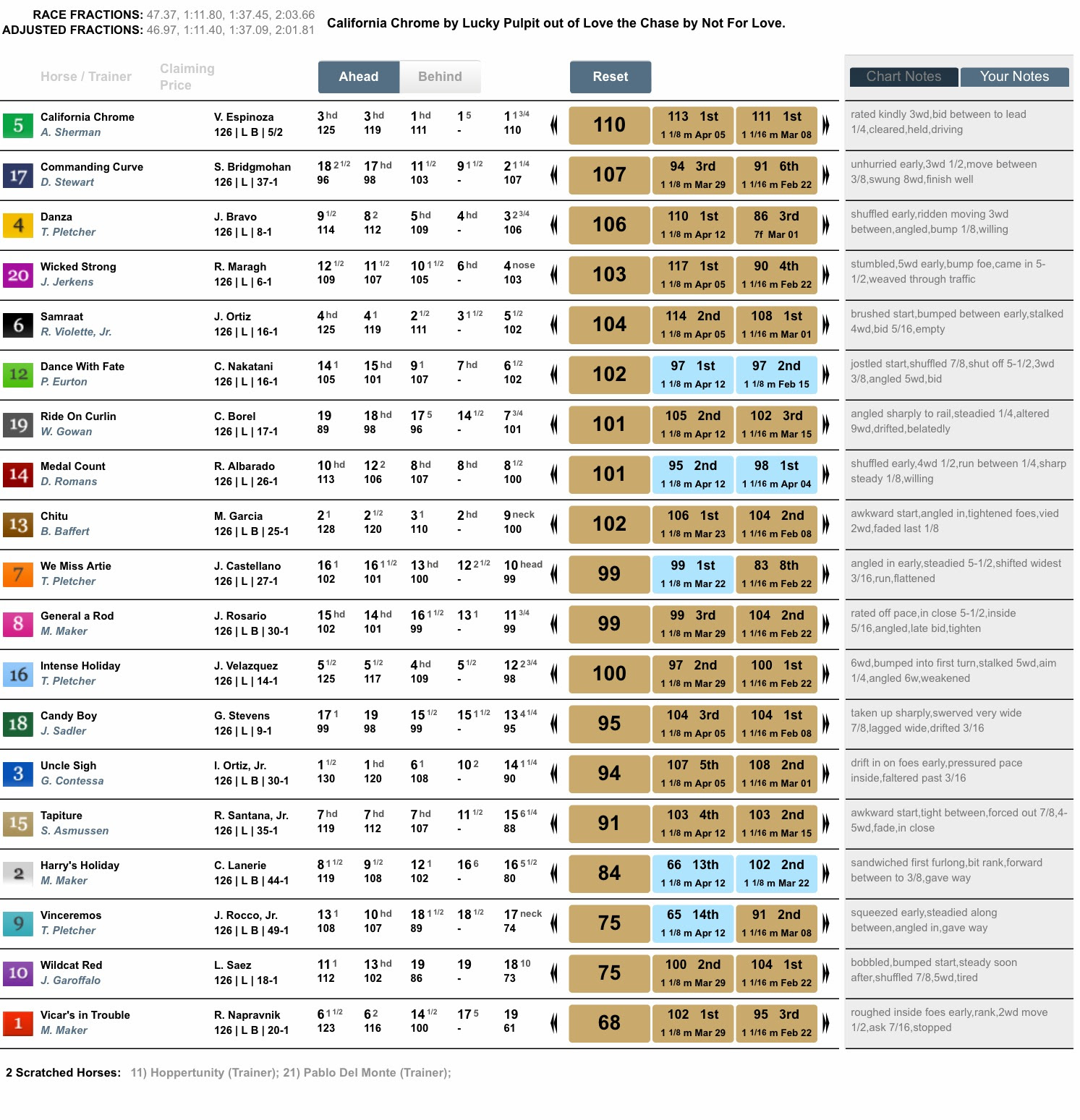 Let’s back up for a moment for a broader perspective.

On the value of raw times:

Like virtually all other figure makers, we know the limits of raw/”official” times for races. Every race, of course, needs to be adjusted based on the speed of the surface on that day, and in certain scenarios, track speed can even change over the course of a day, as well as from day to day. Further, different tracks yield different times at the same distance for a multitude of reasons.

On common factors that impact raw time and track surfaces:

On the whole, we agree with those who think US track maintenance has gotten better over the years. The improvements that come with decades of experience mean horseplayers are somewhat less likely to see a wildly biased track…unless weather comes into play. Weather has messed with racetracks for as long as the game has existed, and it’s always been the track superintendent’s nemesis. Precipitation has a tremendous impact on track speed; so does freezing temperatures, and so does wind.

Wind can be at least a double-whammy. Depending on the configuration of a track and the distances run over it, a harsh-enough wind can impact both the speed of the horses AND the speed of the track, as it gets “looser” because of blowing wind.

A lot of this–especially the wind–was very much in play in Kentucky Derby 140.

Factors specific to this Derby Day:

1) In short, the track surface was “maintained” (dirt racetracks, with sand typically prominent in their composition, are harrowed and sprayed with water, partially for its “tightening” effect) long before the Derby. The Derby Day schedule is expanded in such a way–there’s so much activity on the track–that the main track was left alone far longer between acts of maintenance than it usually would be. (There was 1 hour and 45 minutes between the Wise Dan race and the Derby, while there was only 31 minutes between the 12th-race sprint and the final race of the day, a route, the 13th.)

2) Add the stiff wind blowing at Churchill (gusty wind that declined somewhat after the Derby and through the rest of the card) and voilà, we feel confident the track got slow before the big race. Crucially, throw in the two full runs through the stretch–against the wind–at the Derby 10-furlong distance on the Churchill track configuration, and you’ve got PART of the makings of a slow “raw” final time. Again, on a windy day, those two full runs through the stretch are quite different than what horses face running a mile and a sixteenth at Churchill. Comparisons between the 11th and 13th races are near-folly; they neglect both the impact of wind and the impact of maintenance.

Let’s pause here and count the ways the Derby is an outlier–both on that very card and in U.S. racing in general:

1) There was no other race at this distance on the card.

2) It’s the only field size this large in U.S. Thoroughbred racing.

2a) This typically contributes to a quick opening quarter mile. Note none of the horses who made up the superfecta were anywhere near the lead at the opening quarter–except for the winner.

2b) The field size also contributes to much more trip trouble for the field than in a typical field in our country: ~7 horses running ~6 furlongs. For those who are quick to judge Danza’s performance as “slow,” compare his trip in the Arkansas Derby to his trip in the Kentucky Derby. Day and night. Further, though many horses in the Derby are distanced by the end of the race, virtually all horses–whether closers or speed or anywhere in between–spend much of the race in company rather than with any sort of breathing room.

3) It’s the first time any of these horses has run this far in a race. As you know.

4) The aforementioned wind and maintenance scenarios.

The other factor, of course, was the quality of the horses:

As mentioned, we have the winner regressing slightly from his Santa Anita Derby win. And why not? Please note that in the Kentucky Derby, he ran as fast early as in his Santa Anita Derby win, but did it while shipping to a new environment, and going farther than ever before–good reasons to not quite equal recent wins in which he laughed off smaller fields going shorter.

But the bigger story here is we believe the wind and maintenance and distance (more impact from the wind at that time of day) combined to make the final time seem even slower than it really was. California Chrome may not have broken any records, but his TimeformUS Speed Figure suggests his Derby was stronger than some may think. As for what that means for his Preakness chances, we’ll not jump to any conclusions just yet. We’ll save it for another post.

Like Loading...
This entry was posted in Data Studies, Welcome to TimeformUS and tagged kentucky derby, speed figure. Bookmark the permalink.