I’m often asked how I’m able to time horse races from video replays. It really isn’t a difficult process and there are many benefits. It isn’t perfectly accurate, but when there are problems with a timing system employed by a race track it does a much better job than the old standby, hand timing. I’ve compared hundreds of published hand times against video timing and have learned that no matter how practiced someone is with a stop watch, humans are not able to consistently provide a time that is nearly precise enough for horse races.

I’ve also found video timing is more accurate than non-traditional timing systems used at some race tracks currently, namely Trakus systems and GPS timing systems. There are racetracks that currently or have in the past used the beam system and also one of the newer models and there are often large differences between the two. I’ve found the beam system to be deadly accurate when it works properly, so the differences are almost always a lack of precision with the other system. Let’s look at the steps required to time a race from video.

The first step to time a race is to actually obtain a copy of the replay. The easiest replays to obtain are those posted on YouYube. Many racetracks post some or all races on YouYube. Most internet browsers have extensions available that allow users to download videos from the site. The New York Racing Association provides high definition replays of every race on their own site and similar to YouTube, there are extensions available to make these easy to download.

The final, and least preferred, method is to stream the replays and record them using software that records what is happening on your screen. This method is a little more time consuming and isn’t quite as accurate as timing from video that has been downloaded, but it still is adequate. One precaution is that you have to make sure the recordings are “clean”…free of any streaming glitches during playback. This was very difficult to do years ago but as technology has improved it is rarely a problem any longer. Regardless of which of the above methods you use, a video copy of the race is now available on your computer and able to be reliably timed.

The next step in the timing process is to establish a baseline for the track, distance, and surface you are trying to time. Trying to time races without a baseline can be very tricky. Angles on video can distort things fairly easily and your eyes will play tricks on you. What we are looking for is consistency using races that are timed properly. I generally use four or five races to establish the proper viewing angles for each timing segment and of course final time.

To time a race from start to finish, we simply note the time of the video at the start of the race, then move to the finish and freeze the video. We note the time again, subtract the time at the start, and this will give us the final time. The tricky part is identifying the start of the race. Outside of North America, timing begins at the gate, which is obviously an easy spot. But in North America, we use run up so this part of the race must be removed from timing. Here’s a related article on the poisonous effect of run-up on timing.

The previous step, establishing a baseline, helps us determine how much of the race should be removed. Segments of each race can be similarly timed. Instead of using the finish line, we simply freeze the video at each fractional call and do similar calculations. Once again, this is where the baseline helps. The baseline tells us where to freeze the video visually. Experience has taught me that without using a baseline times can easily be misjudged by large amounts.

I’ll now give an example of the process step by step using a real example. Recently there were some timing errors on a big day of racing at Aqueduct, Cigar Mile day. The first three one mile dirt races had an issue with timing that was readily apparent to seasoned race watchers when the fractions and final times appeared on the screen.

Luckily, the problem was fixed before the final mile race, the Cigar Mile. I was able to use this race as the baseline for timing the others, but I also had others in my library from the same track and distance and was able to first verify the Cigar Mile was in fact timed correctly. I will show how I timed Race 6, the Go For Wand Stakes, using the Cigar Mile as a baseline. I did similar timing for Races 2 and 3 on the card as well.

Step 2: Establish a baseline. I used Media Player Classic for timing. It is simple to use and it is also freely available. Another free option is Windows Movie Maker, but I find MPC to be faster and easier. I opened the chart for the Cigar Mile and noted the times at each segment. The ¼ mile was recorded in 22.88, the ½ mile was 45.68, ¾ went in 1:09.68, and the final time was 1:34.98.

I moved the video to when the winner hit the finish line (the photo finish mirror) and noted the time (rounded to hundredths) as shown below, 1:40.16: 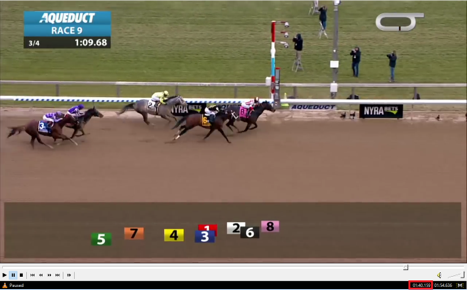 I then subtract the official final time of 1:34.98 to find the start of timing for the race and arrive at 5.18. I move the video to this point using the Go To function of the Media Player and get this: 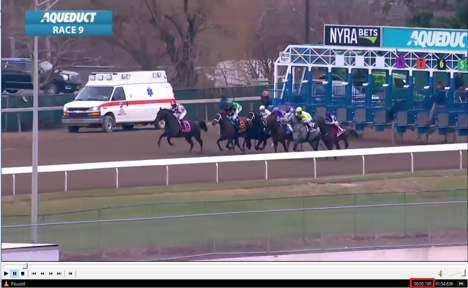 This is where timing for the race began. You will note you cannot see the one mile pole in this frame, but it is clearly visible when the horses are still in the starting gate. This is why I have learned to use a baseline. If you try to use your eyes to align the one mile pole with the leading horse, you are likely to make an error. Angles are deceiving! For the purposes of keeping this article manageable, I won’t include other images used to establish a baseline for the start, but other races looked exactly like this one. This looks like the final time was recorded properly, one mile from the finish with run up excluded. I now add the recorded opening ¼ mile to 5.18 (5.18 + 22.88 = 28.06) and move to that point in the video to establish the baseline for that fraction. 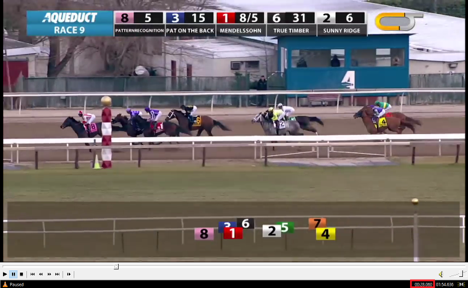 Above, you can see the six furlong pole (six furlongs from the finish) and the leader looks very close to it. Again, remember angles can be deceiving. Other races looked the same with the leader slightly past the pole visually. I’m confident this image is a good baseline for the recording of the quarter mile time.

I did the same for the ½ mile call and ¾ mile pole and then moved on to timing the Go For Wand Stakes, one of the races that had a problem, using these baselines.

Step 3: The actual timing of the race

I use a back to front method to time races, beginning at the finish and ending at the start. This isn’t necessary but it is the method I prefer. Here is the finish line: 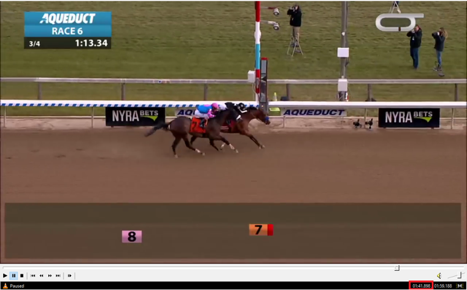 I rounded down to 1:41.89 as the time on video since the best I could get was the winner slightly ahead of the wire on the replay. To get the final time, I move back to the start of the race using the established baseline, note the time, and subtract. Trying to match the baseline visually isn’t perfect. While you can’t see it from the images, I use a landmark to get as accurate as possible. In this case, I used the one mile pole as a reference and went back to the Cigar Mile. Media Player Classic allows you to step through the replay frame by frame. I noted the last frame where the one mile pole was visible, then counted how many frames it took to get to the starting point. I then did the same with Go For Wand to match the Cigar and that is how the image and time above was derived. The time of the start on video is 5.26, and subtracting that from the finish time gives a race final time of 1:36.63. 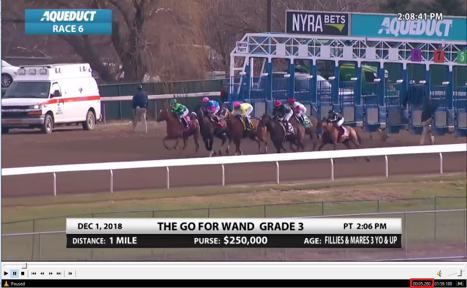 The fractions are then recorded by moving forward and matching the baseline. This is how the first quarter mile looked, timed on video to 28.81 which gives us an opening quarter mile of 28.81 – 5.26 = 23.55. 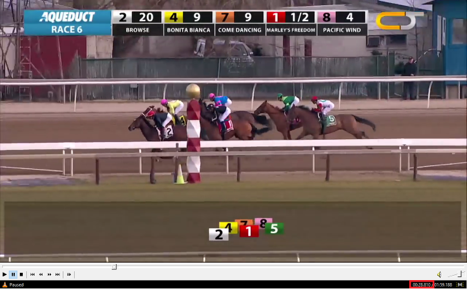 I used the same method to produce times for the ½ mile (46.86) and the ¾ mile (1:11.60) for the race. For this particular day, the timing problems for races 2, 3, and 6 all occurred at the beginning of the race. The second, third, and fourth quarter miles were timed properly electronically and this method verified they were correct. The times of the second and third quarter miles from replay did not match the electronic times exactly, but both were within a few hundredths of a second.

I hope this article helps other players learn to time races from video if they are so inclined. Also, perhaps racetracks will someday soon move to video timing as a backup in place of hand timing races. While it isn’t as precise as the beam system, it is a far more reliable alternative and should be the go-to to check races that appear to have possible timing issues.

Like Loading...
This entry was posted in Data Studies, Player's Point of View, Race Previews. Bookmark the permalink.