Friday’s TimeformUS Highlight Horse: H Man looks to get back in form following a layoff

This is easily the most intriguing race on the Friday card, as it is full of viable contenders – all of whom seemingly have significant questions to answer.

The likely favorite is Ransom Note (#9), who goes out for the ever-dangerous Linda Rice barn. While he was beaten by a few of today’s rivals last time, it was his first start in six months. Rice has good statistics with horses making their second start off a layoff, and Ransom Note worked out a mildly uncomfortable trip racing down inside through the second half of the race. This time, he figures to show more speed. I’ll use him, but I don’t think he’s necessarily a great wager as the favorite.

I instead want to take a horse coming off an extended layoff: 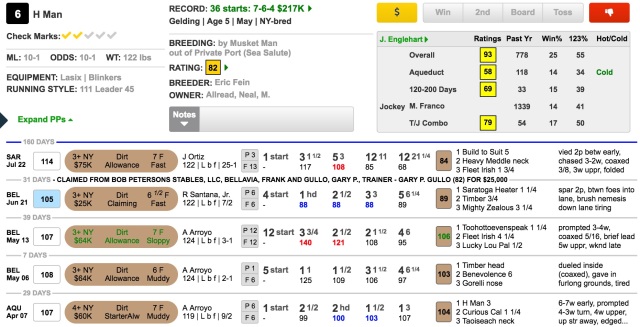 H MAN (#6), who went off form earlier this year and has been on the shelf since a dull effort at Saratoga in July. However, he was claimed back just prior to that race by Jeremiah Englehart, for whom he had produced some of his better races. After giving him that one Spa start, Englehart put him away, presumably to get his form turned around. It’s a pattern that has worked for this barn. Over the past five years, Englehart is 7 for 14 (50 percent, $4.53 ROI) second off the claim in dirt sprints with horses coming off layoffs of 50 days or more – and a number of runners in that sample were laid up for much longer than 50 days. When H Man is in form, he’s certainly capable of winning races at this level. Furthermore, his early speed should give him an advantage in a race where the other pace players may be lacking quality.