Saratoga Highlight Horse for Monday: Improv has a pace edge on the turnback 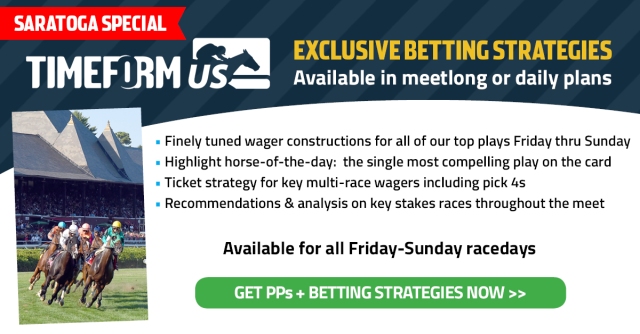 Annie Rocks (#4) was installed as the morning-line favorite as she goes out for the capable Jason Servis barn. I know that she won over this course and distance last season, but that victory came against a weaker field, and I think she finds herself in a much tougher spot this time. Furthermore, I think she’s better going a bit farther than this on the dirt and she may find herself having to rally from the back of the pack.

The big question mark in this race is Nonna Mela (#5), who makes her belated 3-year-old debut after running away with the Grade 2 Adirondack over this course as a 2-year-old. Todd Pletcher has pretty good layoff numbers, but I’m always a little wary of these precocious juveniles who take a long time to make it back to the races the following year.

I like turnbacks in general, and IMPROV (#3) fits that bill as she shortens up in distance after fading late in two route efforts. Even though she was losing ground late in those races, she put in nice efforts. That was especially the case two back when she was involved in a fast pace (indicated by red color-coding in the PPs) that collapsed and was the only horse who contested the pace to be around at the finish. She’s actually run fine going this distance in the past, and I think she’s in better form now as a 5-year-old. The Pace Projector is predicting that she is fast enough to make the lead here in a situation favoring the front-runner.

I’ll primarily use Improv with Malibu Stacy (#1), who gets Lasix for the first time and would be pretty formidable if George Weaver could get her back to her better form.

6 Responses to Saratoga Highlight Horse for Monday: Improv has a pace edge on the turnback