Belmont Friday Highlight Horse: Longshot Ultra Brat can stir up some trouble in the Christiecat

Posted on September 9, 2016 by David Aragona

The Saratoga meet may have ended, but if this race is any indication, the stakes have not gotten any easier to handicap. There is quite a bit going on in here. The horse to beat and likely favorite is Ava’s Kitten (#5), who was a game winner over older allowance foes at Saratoga, proving that she is perfectly capable of winning at sprint distances. But what’s the fun in betting favorites in such a compelling race? After all, it’s not as if she has that great of an edge over this field, and there are other options to consider.

Most Beautiful (#1) makes her U.S. debut for Tom Proctor off a series of respectable performances in Ireland against stakes competition. She’s a sprint specialist and will be prominently featured on my tickets. The same goes for Sky My Sky (#6), who is a cut below the top stakes horses in route races, but may fit well in this short stakes. I’ll also use Miss Katie Mae (#10), who should appreciate getting back to sprinting on turf after trying a few different things since arriving in this country. I’m not quite sure what to do with Coastal Sea (#4), who has been visually impressive winning two races at Laurel, but gets thrown into the deep end of the pool for the first time.

I ultimately decided to take a shot with first-time turfer ULTRA BRAT (#9). 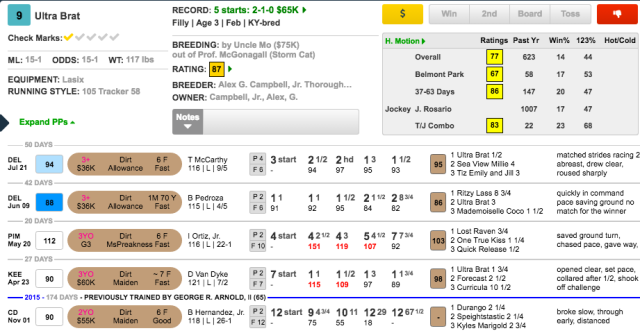 Unlike the runner posted to her inside, Malibu Stacy (#8)—who does have plenty of turf pedigree—this filly’s dirt races are not quite good enough to make her a factor here. However, she is bred to move up significantly with this surface switch. Uncle Mo has quickly become a proven turf sire, and this filly’s dam was a multiple winner on the surface. Furthermore, Ultra Brat is a half-sister to three turf winners, and many runners in the family clearly preferred this surface to dirt. Just watching her dirt races, she has a way of moving that should lend itself well to the turf, and I believe we’re going to see her best performance yet. Whether that will be good enough to beat this deep and contentious field remains to be seen, but the price should be large enough to take a chance on her.

7 Responses to Belmont Friday Highlight Horse: Longshot Ultra Brat can stir up some trouble in the Christiecat