There’s no denying that Bellamy Way (#2) has run the fastest TimeformUS Speed Figures. While he surely did move up on the inner track over the winter, it’s not as if he was totally disgraced last time when cutting back to one turn on the main oval and losing to Sioux, who put in a spectacular effort in victory. That said, he’s probably going to be a short price again today, and we think there’s at least one other very talented runner in this race.

Based on speed figures, RALLY CRY (#4) is not quite fast enough to win this race. 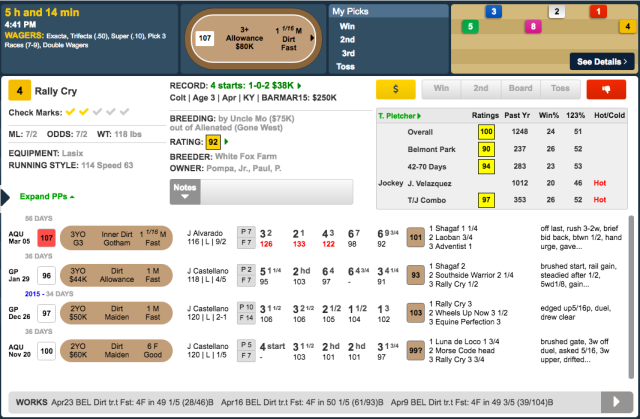 However, Rally Cry has had major excuses in each of his last two starts, and we feel that he’s in better form than it appears. Two back he was pushed into the rail on the far turn, causing him to get shuffled to the back of the pack. Then last time, in the Gotham, he was racing two- to three-wide the entire way while horses that rode the gold rail dominated the race. Rally Cry possesses good tactical speed, so he should work out a good trip stalking the speedy Groupthink (#1).

Sea Raven (#6) and Waymond Boyd (#7) will try to mount late runs, but we think the race flow may work against them.