Ranger’s Coming (#7) has run well in both of his turf starts, doing well to withstand a fast pace last time when hanging on for third. However, he may face a similar pace scenario today. He gets a positive rider switch to Irad Ortiz, Jr., who has been riding better than anyone else in this colony lately.

We’re also somewhat interested in Harlan’s Humor (#8), who was carried out into the first turn last time, but didn’t do much running thereafter. He could show up with a better performance this time, especially if the pace heats up. Deep closers haven’t been having much success over this turf course, but he could sneak into the trifecta at a big price.

E J’s Legacy (#2) should get plenty of support as he makes his second career start for Linda Rice, who gets an excellent 99 trainer rating in that category. However, this horse did get a fast pace to close into in that debut, and we don’t completely trust him stretching out in distance. He’s a major player, but horses like him are often overbet. 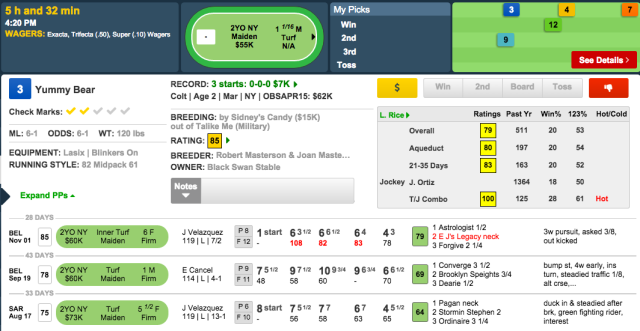 The best race that this colt has run was his one-mile effort two back. Despite breaking alertly that day, his rider was intent on wrangling back, and ended up giving away all of his early position to race near the back of the pack. Entering the stretch, Yummy Bear was in no position to make a late impact, buried down on the rail far off a pace that had slowed down considerably midway through the race. He was forced to alter course a few times as he weaved his way through traffic, but did finish up nicely, suggesting that he handles the distance. Linda Rice has excellent numbers adding blinkers (98 trainer rating), and we wouldn’t be surprised to see this one show a lot more speed today.