Posted on November 5, 2015 by Craig Milkowski

>>Learn How To Use TimeformUS Pace Figures

The 2015 Breeders’ Cup Turf was a fascinating race for a variety of reasons.  Group 1 Pre de l’Arc de Triomphe winner Golden Horn was the first winner of that race to run in the Breeders’ Cup since Dylan Thomas in 2007.  Another compelling shipper from Europe (and the eventual winner)  was the three-year-old filly Found.  The American contingent included the popular runner and winner of the Grade 1 Arlington Million, The Pizza Man, as well as other 2015 Grade 1 winners Slumber, Twilight Eclipse, and Big Blue Kitten.  But it was Shining Copper, Big Blue Kitten’s pace setter, that is the focus here.   TimeformUS has been providing Past Performances since 2013.  However, pace and speed figures are available dating back to 2004.  In that time, no horse had ever recorded a 200 figure at any point of call.  Shining Copper’s first half-mile in the Breeders’ Cup Turf?

What do these large pace figures really mean?  In addition to his 215 half mile, Shining Copper ran a 157 pace figure for the first mile while the winner of the Breeders’ Cup Mile, Tepin, ran a 131 final-time figure for the same distance.  Would this pace figure translate to victory if the leader turned back in distance to a race like the Mile?  The answer is most likely no, and this will be explained in detail a little later in this piece.  Pace Figures at TimeformUS should not be compared to each other unless the comparison is done between races at the same distance and over the same surface.  The bigger the difference in distance and/or surface, the less reliable the comparison is likely to be.  Even if the surface matches and the pace figures are both for, say, the opening half-mile, the comparison won’t be valid if the overall distance of the race is not the same.

The best use of TimeformUS Pace Figures is for a comparison to the final-time figure of the race for each horse.  It is a good measure of the pace of the race and helps determine if it was too fast, too slow, or somewhere in between.  In the Breeders’ Cup Turf, winner Found was assigned a final-time figure of 129.  Shining Copper’s pace figures of 215 for the first half-mile and 157 for the mile were clearly too fast for his own good.  This isn’t a surprise when a horse is leading by 19 and 20 lengths, respectively, but not all races are this obvious.  At TimeformUS, each track and surface combination is evaluated, and for each final time, an optimal time at the pace calls is calculated.  The Breeders’ Cup Turf final time had an optimal half-mile time of 52.14 seconds.  The actual half-mile time of 48.38 was nearly four seconds too fast and is why the pace rating was so high in this case.  No horse could ever be expected to run that much faster than the optimal time and have anything left for the finish.  This is why the pace figure is so high in this instance.  The horse ran way too fast for a mile and a half on turf at Keeneland.

This leads us back to the comparison of various figures and how Shining Copper might have done in the Mile.  If the figures can’t be compared, how can we assess horses turning back or stretching out in distance?  The answer is the TimeformUS Adjusted Times.  These are available in both the past performances and the charts of the races.  The adjusted times are calculated so that times can be compared across different distance and surface combinations, and they take into account the number of turns in each race segment.  They measure actual speed.  For example, a horse recording a 45.00 half-mile time at a mile on turf has run faster than a horse running a 46.00 half-mile at six furlongs on dirt.  The faster the adjusted time we show, the faster the horse actually ran.  These are the one mile adjusted times as seen in TimeformUS Past Performances and Charts for the example above:

Clearly, despite leading a longer race by at least 20 lengths and getting a higher pace figure, Shining Copper did not run nearly as fast for one mile as Tepin did.  It is possible he could run faster if turned back in distance and ridden more sensibly, but highly unlikely he could make up the 3.15 second difference in adjusted times.  The adjusted times are used heavily in the TimeformUS Pace Projector as well, for this reason.  They are more reliable for comparisons across different distances and surfaces than the TimeformUS Pace Figures.

TimeformUS Pace Figures are best used to assess the pace of an individual race and the effect the pace might have had on the participants.  It is not recommended that the user compare pace figures across different races.  This is why TimeformUS Adjusted Times are available.  Shining Copper ran some huge pace figures in the Breeders’ Cup Turf.  It was interesting to watch and to see in print numerically.  But all they really mean is that he ran much too fast for the conditions of that race and the speed of the track that day.  Since he was entered merely to be a pace setter, he certainly did his job. 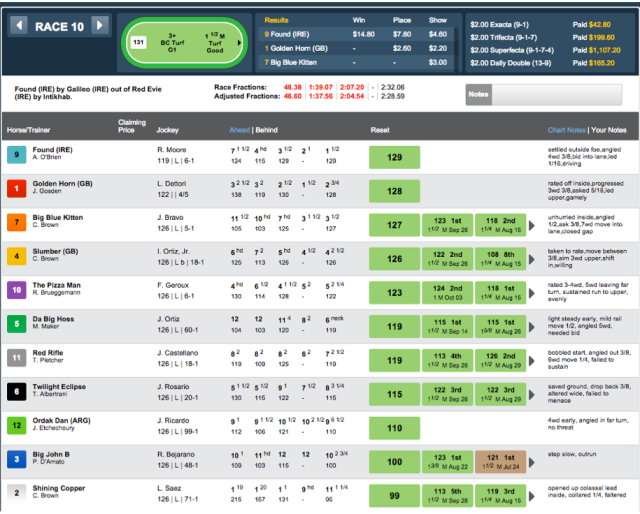