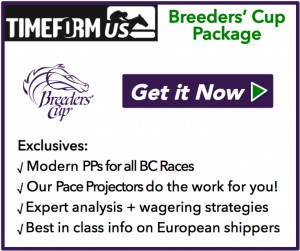 Note: This is an excerpt from the TimeformUS analysis of ALL 13 Breeders’ Cup races. Each race is evaluated horse-by-horse, and we designate the most likely winner and a possible wagering strategy to pursue. To get the full analysis e-mailed to you Thurs, buy the TimeformUS Breeders’ Cup Package:

>Details on the Breeders’ Cup Package

>Or just buy it right now

The Breeders’ Cup Dirt Mile has 10 colts and geldings, but the defending champion, Goldencents, is going to get the bulk of the attention, and we find it hard to put up a big argument with this, as Goldencents has much in his favor–starting with the pace.

According to the Pace Projector, three horses will be on the early lead: Goldencents, Vicar’s in Trouble, and Fed Biz. And according to the pace analysis provided by our Chief Figure Maker, Craig Milkowski, the pace of the race will be moderate. This would seem to point to a scenario in which Goldencents is sent from his rail post and saves ground in a bunch-up field.

Now let’s look at the field in post position order, with morning line odds in parentheses:

Goldencents (6-5): 6 for 17 lifetime. 3 for 6 at Santa Anita. 2 for 2 in one-mile races at Santa Anita. Goldencents is being trained by Leandro Mora for this race because his regular trainer, Doug O’Neill, is on a drug suspension. This trainer switch does not concern us in the least. Mora is O’Neill’s top assistant. He knows what he’s doing. His horses have been firing during O’Neill’s absence. He trained Goldencents in the lead-up to his debut. He has an overall Trainer Rating of 95, which is a lot higher than O’Neill’s rating. One could go on. Goldencents enters this race off a nose loss in the Santa Anita Sprint, a race in which he raced wide and looked like the winner before he got nailed by a Hong Kong shipper. Goldencents earned a speed figure of 117 for this performance, and it was a race that should have him set up perfectly for this one. Simply put, on our speed figures, Goldencents is a little bit faster than his competition today. He handles the distance. He has possibly the best rider in California. He draws a post that is conducive to utilizing early speed. Our Race Ratings show that he exits the strongest races. He has reportedly been training superbly for this. He is going to be awfully tough to beat.

Carve (15-1): The 17th start of his career produced his best speed figure: a 109, earned while he was being soundly beaten in a minor stake at Churchill Downs. This gelding has a strong record at a mile. He has been running in races that have received Race Ratings that are not all that far off the 114 rating that this race receives. His trainer, Brad Cox, gets an overall rating of 98 and has been having a terrific year. Carve will need to work out a trip in here. The Pace Projector shows him in 7th place on the rail at the halfway point. But we find him kind of interesting at a big price.

Vicar’s in Trouble (12-1): According to Craig Milkowski, this colt figures to have some difficulty dealing with the sprint speed he is up against in this race. And with his speed figures being a little bit light, he can ill afford any other disadvantages.

Pants on Fire (6-1): This six-year-old projects to get a comfortable stalking trip today, unlike last year, when he had a very difficult trip in this same race. Unfortunately, he has 28 career starts and so far this year, he has been unable to get near his best speed figures from last year. To us that is a negative that trumps the positives that he does have in his corner.

Handsome Mike (30-1): Hasn’t won a race on real dirt in ages and seems unlikely to win one here.

Golden Ticket (15-1): Deep closer was 2nd in this race last year and will certainly try similar tactics again, but the pace seems unlikely to flatter him, and he entered last year’s race in much better form.

Bronzo (12-1): Chilean gelding brings a couple of serious speed figures into battle, but he is about to get tested for class and early speed in a big way, and his Group 1 success in Chile is not sufficient to set us at ease.

Fed Biz (7-2): Fired his best shot in the controversial Awesome Again, almost taking down Shared Belief after that one was subjected to some unpleasantness and was forced to lose a ton of ground racing wide. Was thoroughly humbled by Goldencents in this race last year and by Tapizar the year before. Pace Projector shows him three-wide on the lead. However, he has proven himself perfectly capable of coming from off the pace. Has run his race at distances both shorter and longer than today’s. Is being prepared by a Hall of Fame trainer. Has quite a bit working for him, but we seriously doubt that he will be up to tangling with the version of Goldencents that we expect to see today.

Tapiture (6-1): What a beautiful pattern of development this colt has on speed figures! If only his numbers were a little faster and his post position a little closer to the inside. Still, his trainer gets a rating of 89 off comparable spacing, and if, against appearances, the pace does heat up, he could be in a great spot to profit. A contender at a price.

Big Bane Theory (15-1): Plainly talented but figures to be coming from far back, possibly against the shape of the race, and will probably be back on grass in haste.

Key Goldencents in exotics. Use Tapiture and Carve underneath in vertical exotics.