All three New York-based Derby contenders worked out there on Friday, with Samraat working a mile at Aqueduct and Wicked Strong and Uncle Sigh breezing seven and five furlongs, respectively, over Belmont Park’s training track. [KentuckyDerby.com]  They all earned the usual accolades that we’ve come to expect from trainers before the big race.

Rick Violette (Samraat): “Time was only important if he went too fast, and he didn’t. He went great.”

Jimmy Jerkens (Wicked Strong): “As far as how he’s doing, I couldn’t be happier.”

Gary Contessa (Uncle Sigh): “”His last quarter-mile was effortless and it was exactly what I was looking for. He came back like he can’t even blow out a match.”

Talk about clichés!  That’s really helpful, eh?  Uncle Sigh was equipped with blinkers, which he will add for the Derby.  Contessa says not to worry about a Palace Malice scenario, that he’s “rating kindly” with them in the A.M.  His colt has been just a tad short in his matchups with Samraat, so I don’t mind seeing his trainer try something new in order to get him over the top.  Uncle Sigh should be a fairly big price after a very troubled trip in the Wood, and I think he’ll be well worth considering with an OK post draw.

Samraat continued his routine of one mile works, though previously, Violette had shipped him down to Palm Meadows in between his NY races.  He’s a colt who should not mind the travel anyway.  He’s obviously a talented and consistent horse, and I like him a lot.  But I’m wondering if he’s perhaps a bit too one-paced to take the top prize in this particular race.

Wicked Strong showed the kind of running style that is more likely to win the Derby when he took the Wood, earning a TFUS speed figure of 117 that is tops amongst all the three-year olds.  On the Beyer scale, by which most bettors will make their selections, he ranks second amongst the colts, four points lower than California Chrome (108).  Wicked Strong had everything go his way in the Wood, and I believe that he’s going to be grossly overbet come post time next Saturday.  Depending on the post positions, I would not at all be surprised if he goes off as the second choice.

The Derby website presents a daily capsule look at the contenders in order of their points standings.  That means that Dance With Fate, a horse who has run [OK, not great but not that] dismally on dirt, is mentioned third by virtue of his win on the Polytrack in the Blue Grass.  What a joke.  Yet, I’m seeing a fair amount of sentiment on Twitter that he has a chance.  I hope that translates into action on the tote board.

Pletcher’s quartet of Intense Holiday, We Miss Artie, Vinceremos, and Danza – which includes the horse I currently like – are all scheduled to work out tomorrow at Churchill.

California Chrome completed his final timed workout this morning, before what was reported to be a sizable crowd at Los Alamitos.  Our buddy Simon Bray reports from the scene:

Stay tuned for the effusive comments of trainer Art Sherman.

– Our two free races of the day are actually races of the night.  The Grade 3 Derby Trial has a post time of 10:01 PM, and for those of you who are not boycotting Churchill over their takeout increase, we have a preview by Mike Beer up here.

The Grade 3 Lone Star Mile is scheduled to go off at 10:51 PM.   It looks like quite a contentious affair, and Pace Projector is calling for a Fast Pace. 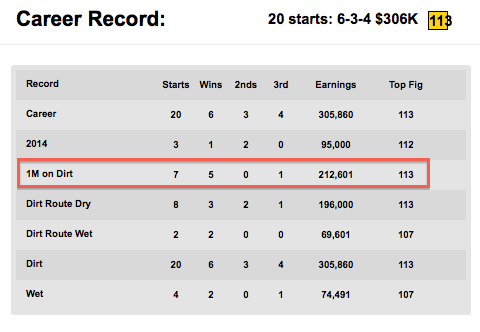 He’s dealt successfully with hot paces in the past, and is an obvious threat if he can shake loose from Skip the Pinot (#7, 12-1), a Louisiana-bred who figures to be gunning for the lead early in his graded stakes debut.  Morning line favorite Taptowne (#5, 5-2) goes second off the layoff after a disappointing third in the Razorback at Oaklawn.  Son of Tapit is as consistent as they come, in the money his last ten starts, earning figures of at least 108 in each of those races.  However, one mile may not be his preferred distance; he is winless in five such attempts, spanning all three surfaces.  And he almost certainly will not offer value on the board.

Here’s a couple that we find interesting in this spot, and who should offer better value:

Forest Mouse (#4, 5-1) has returned from a long layoff (310 days) in excellent form for trainer Henry Dominguez.

True, he did get away with a very slow pace in wiring an allowance field at Sunland in that last effort.  However, he has shown in the past that he can sit back off a hot pace and pass horses in the stretch.  He has some back figures that match up very well in this field.  He has a sparkling record of 5-4-1-0 in two-turn one mile dirt races.  The trainer has a perfect rating of 100 with horses running third time off a layoff.  And Forest Mouse signaled his readiness with a bullet five furlong work of 59 1/5 over this track last weekend.  He hasn’t faced a field of this quality, so he’ll have to step up his game.  But he certainly seems fit and ready to do so in this spot.

Proud Strike (#9, 15-1) is another horse who has returned in fine form after significant time off.

This son of Smart Strike, a full brother to the multiple graded stakes winner (on turf) Pleasant Strike, would have to improve his speed figures significantly in order to contend here.  However, he’s lightly raced and in capable hands, so he would seem to have room for improvement.  With a late pace rating of 104, tied with Stachys (#1, 8-1) for the best in the field, he stands to benefit from the predicted fast pace.  He used that late kick to close stoutly in the slop against a speed bias in his return at Fair Grounds.  Then, he closed for second to Carve, who returned with a big effort to be third in the Oaklawn Handicap, just 1 1/4 lengths behind Will Take Charge.  So, we think that Proud Strike could at least enliven the exotics with a late run.