Get Aqueduct PPs for Saturday

The long and winding road to the Kentucky Derby makes its way back to Aqueduct today, with 11 three-year-old colts running nine furlongs. 100 Derby points go to the winner, 40 to the second-place finisher, 20 to the third-place finisher, and 10 to the fourth-place finisher. In other words, this race has a distinct do-or-die quality to it for most of these horses.

The favorite on the morning line, at 2-1, is the much-discussed, hyper-talented Social Inclusion. In two starts, this colt has done nothing wrong and a whole bunch of things right, including both times winning in a walk and both times earning powerful speed figures (107 and 112). This son of the promising sire Pioneerof the Nile has license to be any kind, but our thinking is that his closing odds will be a poor fit for the chances he is indeed something special. And we believe he will need to be something special to win this race in these conditions. After winning both of his starts wire to wire, with breezy ease, he now draws the outside post in a race that begins very close to the first turn.

According to the TFUS Pace Projector, he will be in fourth-place early, which would require him to change his running style and very likely cause him to be wide around the first turn (if not both turns).

He will be making his first start away from Gulfstream Park, a track known to confer a large home field advantage on certain horses. He will be jumping from allowance company to a Grade 1. Should he decide to make a run for it and try to outrun the Pace Projector’s projection, he will be tangling with a talented frontrunner in Schivarelli. Much as we respect Social Inclusion’s talent, we are playing him to miss the board in the Wood.

Our top choice in the Wood is a colt who has already earned enough points to qualify for the Kentucky Derby: Samraat. In five career starts, Samraat has recorded speed figures of 85 87 93 108 108. As the distances have increased, his speed figures have increased, which we feel nullifies the apparent disadvantage of his mediocre Pedigree Rating. Moreover, Samraat’s victory in the Grade 3 Gotham was very impressive from a visual standpoint. It was the type of push-button effort one sees from horses who have more in the tank and the ability to make their own trips. And given the crazy nature of the Wood, with 11 horses beginning so close to the first turn, Samraat will be obliged to do some work to carve out a good trip today. 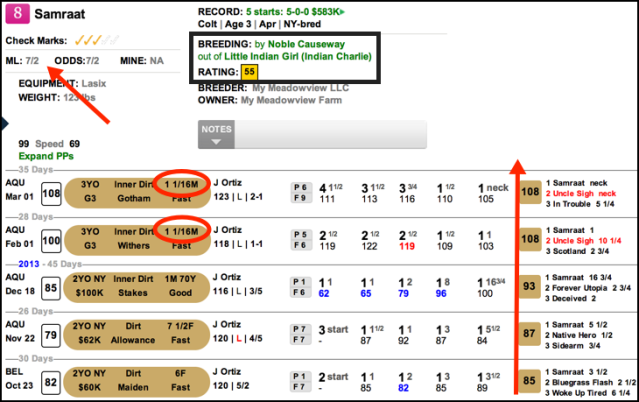 As far as the rest of this field is concerned, the horses we see as the biggest threats are Harpoon, who ran an odd, uncooperative race in the Gotham, Uncle Sigh (who figures to have trip problems from his post), and the longshot Schivarelli, who just ran a terrific speed figure of 113 in the mud and may be able to clear off against this field.

Exotics using Samraat over and under the horses mentioned.

Like Loading...
This entry was posted in Race Previews and tagged aqueduct, kentucky derby, samraat, wood memorial. Bookmark the permalink.

5 Responses to The GI Wood Memorial