One Racing Problem We Can Fix

Recently, there has been a lot of discussion about the increasing complexity of race conditions and how this complexity turns off newcomers to horse racing by contributing to a feeling they have that the game is inscrutable. While we’ve appreciated the discussion, we feel some key points have been missed—and perhaps that helps explain why racing has seemed “inscrutable” to not just those looking at Past Performances lately.

Yes, as racing secretaries fight horse shortages, they have been writing races with increasingly byzantine conditions, replete with mixtures of non-winner qualifications, optional claiming prices, no-win since February…etc. But let us not fall into that common trap of longing for good old days that weren’t all that good.

Take a look at some past performances from the 1970s, say. Simple, easy to understand?

Yes, because they were far less detailed, to a fault.

An allowance was an allowance. A $2000 claimer was a $2000 claimer. Handicappers who wanted to dig deeper were advised to look up the results charts, where they could read the full conditions and learn that in fact these races were nothing alike. What a great game?

Then take a look at the original Steve Davidowitz classic “Betting Thoroughbreds,” which came out in 1977 and in which the author goes into splendid detail on how to read race conditions and grapple with the complexity hidden beneath the simple surface of the old PPs. Or read the original “Handicapper’s Condition Book,” by James Quinn, which came out in 1981. This was the Golden Age of simple race conditions? When a newcomer feels obliged to read a 230-page book in order to handle race conditions competently, we are in an age of something, all right, but it was never Golden.

The chart below breaks out the progression of race conditions in North American Thoroughbred Racing since 2000:

There’s no “gotcha” moment in the table above, as you can see. There are more race types (such as ALW or MCL) now than in 2000, but actually fewer “conditions” (such as NW3) now than there were back then. We’d make the case that conditions and their attendant abbreviations have always been confusing to all but a slim minority of racing’s customers. Congrats if you are or were ever in that minority, but we think you’re missing the point.

The aesthetic debacle is easy to take shots at, but there’s a far bigger problem: Simply put, race conditions are a woefully clumsy way to judge the relative strength or weakness of a field of horses.

Race conditions tell us who was allowed into a race, but they do not tell us who actually showed up (or will show up) in the starting gate. In that sense, they measure the potential strength of a field instead of the actual strength of a field. That is akin to measuring the talent present at a Hollywood Oscar Party by looking at who was invited to the party rather than by looking at who actually showed up at the party (you should have seen our invite list!).

Is there a better way of understanding the class of a field than the conditions? Anybody who has compiled par times over the last 20 years or so will see that field strength can vary wildly within a given condition, to a point where the very idea of utilizing par times can seem like a bizarre act of faith. As a result, to make the assumption that a race at one level is necessarily stronger or weaker than a race at a different level, or that identical race levels mean comparable field strength, is to court errors of the wildest sort, at least here in North America.

In other words, from the handicapper’s perspective, race conditions are ugly and they routinely do not work. And people handicap horse races on these things? In 2014?

Far better, we feel, is to refuse to make assumptions based on race levels, and instead start doing the hard work of digging down into each race to see what quality of horse made it into the starting gate. Far better for the PP provider to dig in and make progress, to develop new ways to simplify the understanding of the class of today’s field and of prior races. This is why databases exist, and this is part of why speed figures exist. 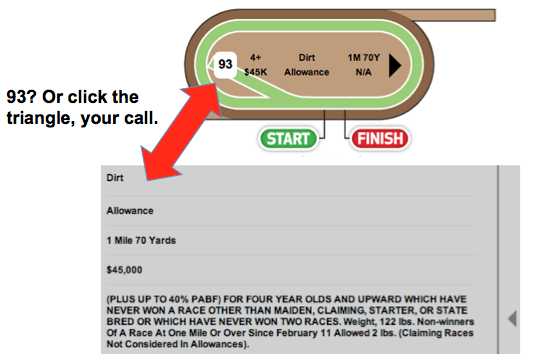 At TimeformUS, we measure the strength of each field by evaluating the horses who made it into the starting gate for the race. That is how we make our Race Ratings, which we present as a simple two-digit or three-digit number. Races are run by the horses in the starting gate, not by the horses who were eligible for a race but didn’t run in it. Think your expertise on obscure conditions gives you an edge? Fine, the unabbreviated conditions for each race are never more than a click away. Meanwhile, we’ll work on making our Race Ratings better and better, to make it easier for customers of all levels.

Isn’t it about time that PP providers take it upon themselves to do away with the abstruse language that leaves newcomers to horse racing asking themselves why they’re grappling with this strange, baffling material rather than buying a lottery ticket in the corner liquor store?

To learn more about our Race Ratings, click here.

7 Responses to One Racing Problem We Can Fix