We are particularly excited about our newest product feature – the track bias indicators (for main track races, dirt and synth only) – that are explained in detail in this post. Here’s a look at how they look: 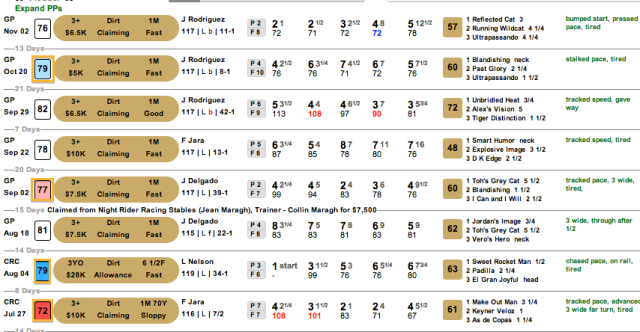 This horse displays the full range of options: Light red and blue means that the track had a distinct speed or closers bias, respectively.  Dark red denotes a more extreme speed bias; and dark blue means that a dead closer like Zenyatta would have been extremely happy that day.

Why are we particularly excited about this?  Well, as you probably know, our mission is to help you understand races faster.  We recently added an option to scroll through a day’s entire set of result charts, which would be the standard way to try and determine whether a track was playing a particular way on a particular day.  That’s an extremely time-consuming, and only somewhat efficient, way to ascertain the presence of a track bias.  I say “only somewhat efficient” because even taking the time to scroll through a complete set of charts lacks the context behind the results.  Perhaps speed horses dominated because they were lone speed favorites that were expected to do so?

Our bias indicators take that fully into account, and weigh the results against the running style that would be expected to win that race.  So a day full of expected lone-speed winners will not be rated as speed favoring.  So not only does this help you understand races faster…..but better, too.

– Once again, we are offering free past performances for the entire day of racing at Meydan on Thursday, and will continue to do so on a weekly basis.  You can access them here.  Not only are they free, but, as of this posting, they are unavailable from our competitors.

Cold weather today has canceled racing up and down the East Coast – Laurel, Charles Town, and Penn National have all nixed their programs today and tonight.  There is racing at Beulah Park for some reason with the current temperature nine degrees.  The fields are so short that there is no show wagering for each of the first six races.  So you show parlay guys need for look somewhere else.

There is racing down at Tampa Bay, and we have our horses in focus up on the blog now.

In our never-ending search for races with prospective favorites that look vulnerable, Sammy Alexander is listed as the 3-2 morning line favorite in the fifth at Tampa.  Here’s a British import who has yet to win in North America, burning mucho cash in the process.

Sammy has tried blinkers on, blinkers back off, vying for the lead, tracking, closing, dropping in class, all to no avail.  Here, he takes a desperate drop to 16K claimers.  But his race two back makes him look particularly vulnerable here.  Despite being a 50K claiming affair, the race came up with a weaker race rating (85) than today’s race (86). Also, he stalked a pace that was particularly slow (pace figures for the leader denoted in blue), and still came up empty.

Most logical alternative appears to be the morning line second choice, Family Foundation (5-2), in the money each of his last five races, all on turf, for trainer Jamie Ness, a trainer with perfect 100 trainer ratings practically across the board, especially in the low claimer category.

But another who looks interesting is the #1 horse, Ripinandatearin (6-1) (not what you want to be doing with your tickets after the race).  Here’s a four-year old who has found a home on grass since switching to the surface last May.

Returning from a layoff, and going for a new barn in his last – a race with a strong rating of 92 – he tracked an extremely fast early pace, and still finished evenly despite some traffic problems.  Now he wheels right back for a trainer with a perfect 100 rating for 8-14 day layoffs which far exceeds his general ratings otherwise.   Looks like he could improve his fortunes if he can avoid a fast pace here….which seems like a good possibility in a race without any confirmed front runners.