How to use: Race Ratings

Want to understand those letters next to race ratings? Find out how right here.

Just looking to understand the race ratings themselves? Read on…

In the July 6th Dwyer Stakes at Belmont Park, Moreno was making his first start in a stakes race just one start after breaking his maiden. First-time blinkers (noted in red), a trip from California to New York, and an off track all may have had an impact on him earning his first win. 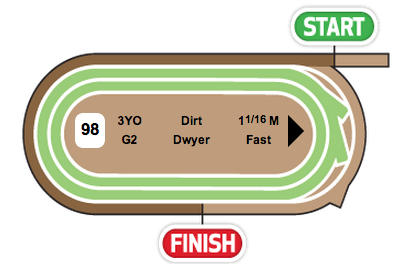 In contrast, the Grade 2 Dwyer was not a highly rated race, as it garnered only a 98 Race Rating.

When comparing a Grade 2 Stakes race in New York and a maiden race at Santa Anita the overwhelming majority of handicappers will assume the Grade 2 had the tougher field. Our Race Ratings gave higher marks to the majority of Moreno’s California maiden races. Using our Race Ratings it was evident that Moreno was only facing a small jump in class when moving from maidens to face winners in a stakes race. Moreno won the Dwyer by 7 lengths and paid $13.40.

Use Race Ratings to judge the quality of the opponents that a horse has been facing in his previous races. Then compare those to the rating of today’s race. The Race Ratings are particularly useful for horses like Moreno who are switching circuits and making perceived jumps or drops in class. Race Ratings simplify handicapping by assessing the quality of the competition and presenting this assessment in one number, Race Ratings take the time-consuming work out of judging class.

Q: Does the Race Rating represent the speed figure required to win the race?
A: No, the Race Rating you see in the Abbreviated Race Conditions Header is designed to approximate the average quality of the major contenders in the race.

Q: Can Race Ratings change after a race?
A: Yes. Remember, the rating is based on the recent performances of the race’s top contenders. After the race is run, we’ll have information based on actual performance, and we’ll adjust the rating accordingly.

Related: How Race Ratings are created

4 Responses to How to use: Race Ratings